Please mark February 5, 2019, on your calendar.  It will be the PA State Council of Farm Organizations Capitol Hill meeting and will coincide with Governor Tom Wolf’s Budget Address to the General Assembly.  There, he will present his Administration’s State Budget priorities.  Agriculture did pretty well in the current budget.  On February 5, we will know what funding  battles will be fought by the Agriculture Community.  Also, although program details are not locked in, we traditionally have the Secretary of Agriculture, Executive Directors of the House and Senate Agriculture & Rural Affairs Committees, and the Ag institutions — Penn State College of Agricultural Sciences, Delaware Valley University and the University of Pennsylvania School of Veterinary Medicine. This will be followed by the heralded Cornucopia Legislative Reception in the Capitol’s Main Rotunda. .  Sincerely, Vince Phillips

The PA State Council of Farm Organizations has initiated the PSCFO Dedication to Agriculture Award to be presented to an individual February 5, 2019.  Nominations must be endorsed by a PSCFO member organization.  Nomination criteria for the award must be based on one or more of the following:

On November 27, the PA Department of Agriculture announced that it is taking applications for sixty 2019 industrial hemp research permits.  This is the third year for this program authorized by the Farm Bill.  As Secretary Redding told the State Council of Farm Organizations at its November meeting, hemp research expanded in PA from 70 acres in 2017 to 720 acres in 2018 with plans for 6,000 acres in 2019.  He pointed to industrial hemp’s many uses for fiber and food grade oil and expressed hope that the 2018 Farm Bill would remove barriers to wider production.  Deadline for applications is December 17, 2018.  Details:  717-787-4843, Bureau of Plant Industry.

PA Wine Board is seeking applications for grants to conduct promotion, marketing, and sale of wines, enhance the wine industry and benefit wine producers in Pennsylvania.  Deadline for proposals is January 18, 2019.  Details:  Patrick Andrews, patriandrew@pa.gov

Rick Leese has been named to the PSCFO Board, replacing Dan Leese whose family moved to China.  Representing the PA Farm Bureau, Rick is a Fulton County farmer raising beef cattle and vegetables as well as hog finishing.  Earlier, Colleen Hershey was appointed to fill the term of Amy Bradford who had a job change.  Colleen represents PennAg Industries Association.

DECEMBER IS A CROWDED MONTH

There are numerous events scheduled in December by various agricultural groups.

IN MEMORIUM…Former PA Representative Vincent Biancucci (D-Beaver) passed away at the age of 78.  He succeeded Nick Colafella in that position and served 2002 through 2008.

On March 1, the last of four workshops was held in Bedford County to inform produce growers on how to comply with the Food Safety Modernization Act’s regulatory requirements.  The other three were held in Tamaqua (Schuylkill County), Kutztown (Berks County), and Windsor (York County). Presenters were from the PA Department of Agriculture who walked growers through areas such as worker safety & hygiene, use of water, risk of animal contamination, and ways to avoid contamination during storage.  Statistically, 46% of food sickness incidents requiring medical treatment and/or hospitalization have been traced back to farms.

The PA Department of Agriculture announced March 3 that the PA Wine Marketing & Research Program Board is soliciting proposals on marketing and research projects to increase quality profitability, production and sale of wines.  Applications are due April 20, 2018 to PA Department of Agriculture, Agricultural Commodity Board Grant Program, 2301 N. Cameron St., Harrisburg, PA 17110.  Details: www.pabulletin.com

March 20, 2018 is the last postmarked date for referendum ballots on continuation of the PA Vegetable Marketing & Research Program to be submitted.  Eligible voters are vegetable producers who grew at least one acre of vegetables in 2017’s growing period or grew vegetables in greenhouses located in PA with total space of 1,000 square feet or more.  Voting began March 5.

The PA Department of Agriculture plans to issue seven regulations in the first half of 2018:

The annual House and Senate Appropriations Committee hearings on the State Budget conclude this week. Of key interest is the Governor’s Office and Office of the Budget on March 8 for both House and Senate Appropriations Committees where scrutiny may center on from where the revenue will come to fund the State Budget.  PA Cable Network (https://pcntv.com/schedule/ ) airs most of the hearings.  Secretary of Agriculture Russell Redding testified before both committees.  Thanks to the Senate Majority Communications Office, following is a link to the Senate Appropriations hearing on February 28. https://pasen.wistia.com/medias/h86ncu5jfq The hearing touched on an array of topics ranging from hemp to the Farm Show lease-lease-back (equity loan).

Even though the initial deadline was February 6, the USDA National Agricultural Statistics Service (NASS) asks farmers who have not completed the Census of Agriculture to do so.  Please respond to www.agcounts.usda.gov or call King Whetstone at 717-787-3904 with questions.

FARM LINK PLANS SUCCESSION WORKSHOP in Chambersburg March 8.  The Farm Succession and Transition Workshop will help farmers to pass on the business to the next generation.  Farm Link and partner AgChoice Farm Credit are both PSCFO members.  Details: Michelle Kirk 717-705-2121  mkirk@pafarmlink.org 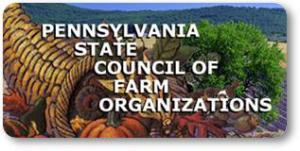 HARRISBURG – The PA State Council of Farm Organizations meeting for the fall has been re-set to October 27 with a Board meeting at 11:00 a.m. (NOTE: This is a change.) and the Council meeting at its regular time of 1:00 p.m.  Location is the PA Department of Agriculture, 2301 Cameron Street, Harrisburg, PA 17110.

Topics to be discussed by the Council include:

Additionally, since for all purposes, the legislative session will be over October 15, expect interesting conversation on what the 2013-14 session of the General Assembly meant for PA Agriculture.  Please RSVP to 717/232-9665 or to Manager@PSCFO.com by October 17 regarding your plans to attend.

Two new Board members are:

The annual meeting of the PSCFO in Harrisburg resulted in significant front-page publicity in Lancaster Farming magazine. http://www.lancasterfarming.com/-State-Ag-Council-Celebrates-Political-Trifecta-#.U0-1VKKg4k_ This underscores the increased visibility and advocacy of PSCFO and it is something of which we all can all be proud.

• On April 12, the PDA published rules under the Food Safety Act and Food
Employee Certification Act to regulate the certifications of food employees. In
the process, outside government comments were received from the PA Catholic
Conference and PA Association for Sustainable Agriculture. Details:
http://www.pabulletin.com/secure/data/vol44/44-15/762.html

• PDA published a proposed Rule that would allow it to contract with other
agencies or vendors to administer pesticide applicators’ examinations in addition
to the monthly PDA exams. These outside entities would be able to charge a fee
for this service. The proposed Rule has been sent to the House and Senate
Agriculture & Rural Affairs Committees for review.

Posted in PSCFO News, Regulations by PSCFO Leave a comment